In practice, premixed-frozen and 2-component cartridges have established themselves. However, their predefined volumes are usually not tailored to the needs of the customer. Unwanted, sometimes very high material wastage is the result. This is expensive and does not match the growing environmental awareness of consumers. It is therefore necessary to reduce material waste in general! But how?

Due to ViscoTec cartridge filling stations the materials to be dosed can be provided according to demand. Complicated mixing and logistically complicated cold chains are now a thing of the past, which not only saves time and energy but also reduces environmental pollution.

Learn more about it in the video:

During a two-week demonstration event at ViscoTec on the subject of cartridge filling systems experts from the aerospace industry were impressed by the application possibilities and potential of state-of-the-art dispensing technology in aircraft construction, as well as of the demand-driven use of adhesives and sealants. 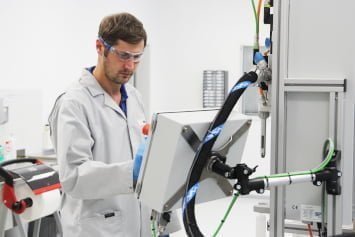 It is not only the increasing demand for new aircraft, but it is also the traditional manufacturing processes within the aerospace industry which require innovative solutions to optimize current production. This also applies to the processing of adhesives and sealants. Particularly when dispensing and applying sealants and sealant compounds, many production steps are still carried out manually. In addition to the manual application of sealants, the mixing process of 2-component polysulfides alone, often involves a great deal of effort.

Due to material properties such as low density, compressibility or demanding mixing ratios, so-called premixed-frozen (PMF) and 2-component cartridges (injection and barrier style) have established themselves in practice. However, in most cases the volumes are predefined, such as 180 ml cartridges, but are not suitable for the application and are only partially used due to the limited processing time. In addition to the costly waste of material, environmentally conscious action is becoming increasingly important for consumers and it is a fundamental goal to reduce material waste in general. 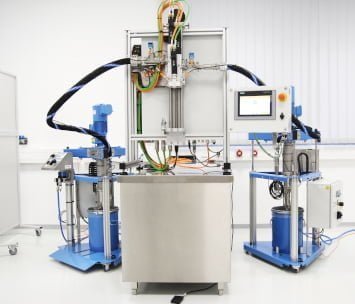 In view of these market requirements, a demand-driven filling system was presented during the live demonstration. The visitors were able to individually fill cartridges with the polysulfide “Naftoseal MC-780B-2” provided by Chemetall. The participants were impressed with the easy operation of the unit as well as the technology. After all, precise and gentle filling is a basic requirement for meeting the high demands of the aerospace industry. Without influencing the complex overall processes, ViscoTec cartridge filling stations can make a significant contribution to cost reduction through more efficient material supply.

The heart of the filling systems is the 2-component dispenser vipro-DUOMIX, which was released in 2018. The static-dynamic mixer is perfectly suited for compressible, two-component materials with very different viscosities, extreme mixing ratios and high-pressure sensitivity. Volumetric dispensing at low pressure is the key to success. Like all products in the ViscoTec portfolio, the vipro-DUOMIX also relies on the technology of the endless piston and offers the proven high quality.

Depending on the production volume: Scalable complete solutions thanks to modular design

Each ViscoTec cartridge filling system consists of two material emptying systems and a 2-component dispenser. Depending on the production volume and the available container sizes of the material used, these different standard solutions are easily scalable, always oriented to the actual consumption. If at a later date a fully automated material application is required, the existing equipment can easily be integrated into a holistic solution. 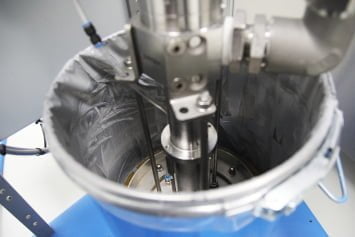 “With our cartridge filling systems, we continue to offer our customers the advantages of flexible material application from cartridges, but reduce material waste to a minimum, while at the same time obtaining material from large containers,” summarizes Sales Manager Franz Kamhuber. Complicated mixing and logistically complicated cooling chains are now a thing of the past, which not only saves energy but also reduces environmental pollution.
In addition to the demonstration, the focus was also on face-to-face dialogue with users. After all, close collaboration with the customer and the fulfilment of individual requirements have always been part of the ViscoTec philosophy.

The scalable system concept, as well as the possibility of adaptation to automated sealant application, was particularly well received by the visitors to the event. However, the typical characteristics of the technology used were also impressive: “As no valves are used, another source of error is eliminated. Valves cause fluctuating mixing ratios in production operations by pulsing the feed and dispensing flow,” says an aerospace specialist from Chemetall.

For more information on the dispensing of materials in the aerospace sector, please visit: https://divi.viscotec.de/en/applications/aerospace/