vipro-HEAD 5 Suitable for Use in Zero Gravity

Trials by the AIMIS-FYT team, with support from ESA, were successful

In the summer of 2020, ViscoTec reported on the AIMIS-FYT team’s project, which uses a standard 3D print head from ViscoTec. The project aims to demonstrate a 3D printing process that can be used to produce structures for solar panels, antennas or other installations in space. Due to the Coronavirus restrictions, the parabolic flights with the European Space Agency ESA took place in November 2020 from Paderborn-Lippstadt Airport, and not in Bordeaux as planned. In addition to the clear realization that preparation is the be-all and end-all, there were many other exciting insights gained by the student team from Munich University of Applied Sciences. The result of the project: The 3D print head vipro-HEAD 5 is suitable for the use in zero gravity. In a conversation with Michael Kringer and Christoph Böhrer from the AIMIS-FYT team, it becomes clear what challenges had to be overcome and what results the experiments led to.

The interview about 3D printing in zero gravity:

AIMIS-FYT team: We can say right away that we are very satisfied with the results and that our expectations were even exceeded. Before the flight campaign, we were of course very excited about the experiments in zero gravity and kept asking ourselves whether everything would work as we had imagined and planned. During the preparation time, there were one or two problems that we had to deal with. We are all the happier now that the campaign went smoothly. Almost all the experiments worked. Some even better than expected. We were able to successfully show that the printing process works under zero gravity conditions.

AIMIS-FYT team: The aim was: To carry out experiments in zero gravity based on the four basic operations for printing structures. Straight rods, straight rods with start / stop points, free floating rods, and connections between rods. Since we had a total of 90 parabolas available for our printing experiments, we modified each of the basic operations even further to try out different printing methods. For example, during the straight rod experiments, we also printed rods at an angle and tested different angles of approach for the nozzle (angle between nozzle axis and printing plate). Here we wanted to see to what extent a shear flow at the nozzle outlet affects the printing process. Rods at an angle with overhang, are much more difficult to print under 1 g conditions, as they easily sag due to their own weight. In zero gravity, printing operations at an angle have proven to be very successful.

The main parameters of the printing process are mainly the printing rate, the extrusion speed of the resin, the UV-light intensity, and the trajectory, i.e., the path of movement of the nozzle exit. The number of parameters and the possibilities of how a rod can be printed shows that even the printing of a simple straight rod can quickly become complex. In addition to the ViscoTec print heads, the necessary components, such as conical UV-blocking dispensing needles from Vieweg and an adhesive from Delo, also contributed to the success of our experiments. We tested the resin long before the campaign and compared it with other adhesives. A catatonically, and at the same time, fast curing with little volume shrinkage adhesive proved best for our requirements. 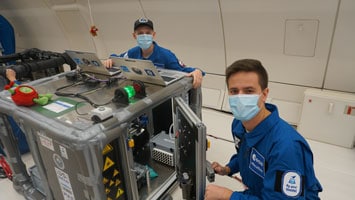 The entire printing process was monitored by cameras and sensors. A detail camera and a thermal imaging camera were mounted so that they followed in parallel the movement of the vipro-HEAD 5, the heart of our printer. We were therefore able to demonstrate that the vipro-HEAD 5 is also suitable for reliable use in zero gravity. A high-resolution camera was used to permanently observe the resin coming out of the nozzle. The thermal imaging camera was used to document the exothermic reaction of the resin at the nozzle exit and along the rod.

With the help of this data, we hope to be able to better control and therefore optimize the printing process in the future. In conclusion, we can say that all printing operations can be carried out in 0 g, i.e. in zero gravity.

On the last parabolas we even combined different basic operations and therefore successfully printed a small truss consisting of five rods. Free floating rods were also printed. These worked to some extent, but without a printing plate as a fixed point, the printing process is unstable and very prone to failure. Any slight deviation in microgravity immediately affects the direction of extrusion of the resin from the nozzle. A more stable process would still have to be developed for the free-floating printing operation.

AIMIS-FYT team: The fact that we were invited by ESA to a second flight campaign, a so-called “Partial-g Campaign”, came as a total surprise and made us very happy. This allowed us to carry out the same experiments under lunar and Martian gravity conditions on another 90 parabolas. We did not have much time between the two campaigns to make major changes to the experiment. In general, the experiments showed that all pressure operations can be performed at any gravity (0 g, Moon and Mars). There are not really any big differences.

In tests where the rod is fixed by a pressure plate, the printing process at 0 g tends to be better. It is easier to print overhangs here because the force of attraction is missing. The free-floating rods, on the other hand, are best produced at low gravity (moon). Here the attraction force is very low, but the rod is stabilized by a defined direction of attraction. Although the resin is extruded from the nozzle in liquid form and curing only begins afterwards due to the UV irradiation, there was no sphere formation in 0 g as with water, for example. This was shown in tests in which we printed without UV radiation and therefore without curing. The adhesive used has a very high viscosity. Printing tests in a vacuum environment have not yet been carried out.

AIMIS-FYT team: We are sure that space flight will benefit from a process like this in the medium to long term. An additive manufacturing technology that can be used directly in space contributes to reduced overall costs, more design flexibility, and an increased lifetime of a space project. This is especially important in times of “NewSpace”, where missions are increasingly carried out by private stakeholders.

AIMIS-FYT team: We are currently working on developing an application for space systems based on the fundamentals we have been able to gather. However, this also requires a great deal of further basic research. For example, we need to take a deeper look at the printing material used. The material properties are strongly influenced in space. For example, we need to find a material that can be hardened in a vacuum, that retains its properties at both high and very low temperatures and that is not attacked by atomic oxygen in the Earth’s residual atmosphere. Another aspect will be that we need to achieve high process stability so as not to jeopardize future missions.